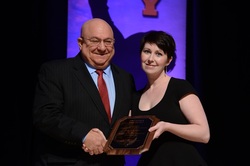 The National Student Nurses’ Association (NSNA) is pleased to announce David R. Ranck, MEd, RN, as the recipient of the 2013 NSNA Leader of Leaders Award.

The Leader of Leaders Award, sponsored by Elsevier, proud publisher of Mosby and Saunders nursing titles, is presented each year to an outstanding dean, faculty advisor, or state consultant who has provided exceptional commitment to his or her students and to NSNA. Mr. Ranck received an expense-paid trip to the NSNA 61st Annual Convention in Charlotte, NC, April 3-7, 2013, where he was honored during the Thursday morning Plenary Session on April 4, 2013. The award was presented by sponsor representative, Amanda Wolff, Executive Marketing Manager, Elsevier.

Mr. Ranck has served for over 35 years as a professional consultant and parliamentarian to the Student Nurses’ Association of Pennsylvania (SNAP) Board of Directors. Countless nursing students have been affected by his dedicated, passion and expertise. NSNA congratulates Mr. Ranck for this merited award and recognition!

“There are not enough words to signify the amount of dedication Mr. Ranck has committed to our organization on both a state and national level,” says Kayleigh Jackson, 2012-2013 SNAP President. “He has exponentially influenced the idea of the evolving professional nurse and as he continues his involvement with SNAP, it is certain that his positive contributions will keep us advancing.”

Back to: Promise of Nursing Scholarships
Powered by